Interglide 2018 was held during the hot and dry summer of last year and enjoyed some of the best flying conditions for many years. How do you follow that in 2019?

The signs had not been good at all. The weather for early UK flying season had been poor with several competitions cancelled or postponed right up to the weekend before Interglide. Even the early part of the week was wet and windy but with great good fortune the weather gods relented and from Thursday onward the rain stopped and the sun came out.

Interglide F5J is now firmly established as a favourite Eurotour for many regular competitors from France, Germany, Holland and Belgium and, of course, the UK. In addition this year we had competitors from Sweden and Turkey plus a young lady with dual German/Brazilian nationality. The entry registration opened in February and by the end of March all 60 places were filled.

We limit the entry to 60 because the flying field is only wide enough to accommodate 12 landing circles plus a couple of spare to allow for re-flights and even that means setting out a flight line of over 170 meters in length. Five groups per round permits 3 rounds to be flown in each session and increasing this to six groups would reduce the number of rounds flown in the time available.

Early in the week Richard Thomas, the ever helpful owner of the airfield, with the help of some volunteers had erected the marquee and, in a repeat of previous years, the fence was removed, the sheep moved and the grass cut on the Thursday.

Early on Friday the safety corridor, landing spots, control tent, PA system, visual display boards and all the paraphernalia now used for running a big competition were set out and tested. Meanwhile the field was full of pilots testing or just flying for fun before the serious competition started on Saturday.

The excellent camp site filled up during the day and many competitors had brought their family members to enjoy the lake and beautiful surroundings of the airfield. Some even took the high speed train from Ashford to London for a day out in the city.

The wind forecast for the weekend was mainly from the north-east so the field was laid out accordingly. Saturday morning dawned with the wind coming from a full 90 degrees in another direction! Moving a flight line of this length is very time consuming and there are width restrictions on the field so as the wind was light a decision was made to just angle the launch and landing direction. Fortunately by lunch time the wind had swung around to the forecast direction and continued that way for the rest of the weekend.

Flying commenced at 9.30am in excellent conditions, light wind with good thermal activity but not too easy to find. There was a delay in publishing the results from the early rounds because the scoring computer after many years of reliable use decided to go on strike so all the scores of the first three round had to be entered into another computer. Fortunately a bit of forward planning had envisaged this possibility so a back up had been prepared. By the end of the day the ‘usual suspects’ were rising to the top of the leader board sometimes managing to fly out slots with very low launches. Notable was Steve Haley launching to only 19m when his motor unexpectedly cut but with very careful and skilful flying he still managed to fly make his time.

The BBQ was lit in the evening and enjoyed by many aided by giving our overseas friends a chance to sample a free barrel of English Ale and a mixture of cans for those with other tastes.

Flying continued on Sunday with a change of weather conditions to more overcast and a moderate breeze which made thermal location more difficult. Any attempt at a low launch often ended up with a short flight and a poor score. The final 12 for the fly off were topped by Adrien Gallet, a previous Interglide junior winner and although still a junior is the French National Champion.

After lunch we had a 3 round fly off of 15 minutes each. By this time the wind had picked up and some pilots had started to use ballast, Thermals were now hard to find and several very short flights were recorded so there was a big difference in the scores. In the second round Adrien Gallet was very unfortunate to have something fail on his model when it was still under power which resulted in it crashing into the trees. In the other round he flew so well that he still finished in 4th place. What would have been the result if he had recorded the other score?

Steve Haley also flew brilliantly in making a ‘save’ when on his landing approach by picking up a small bubble and working it, with some help from a bit of very turbulent slope lift from some trees, to fly out the round making him a well deserved winner.

The prize giving benefited from some excellent prizes many of them generously given by our sponsors Flightech, Hyperflight and West London Models. The junior prize was won (again) by Adrien Gallet who also qualified for another prize because of his fly off place. We only had one junior prize so the trophy was given to Adrian but we decided to give the associated prize to his little brother, Romain, who finished as the second junior and was competing in his first Eurotour. Sophie Cotrim Freundl finished as the third junior with another very creditable performance and shows that she will also be a serious competitor in the future.

All in all a weekend that seemed to be enjoyed by all and we hope to see everyone again in 2020.

PS A big thank you to Richard Thomas for the use of his excellent facilities and all his help. Richard was hoping to do an aerobatic flying display on Saturday evening in his Skybolt but a few days before had managed to do a heavy ‘arrival’ which tore off the tailwheel and badly damaged the rudder.

Repairs were underway over the weekend and anyone visiting the one of the hangers was welcomed with the familiar smell of dope drying. Unfortunately repairs were not completed until Sunday but those who stayed on Sunday evening had a fine display of a ‘test flight’ that seemed to include various rolls, loops and stall turns! Maybe next year? 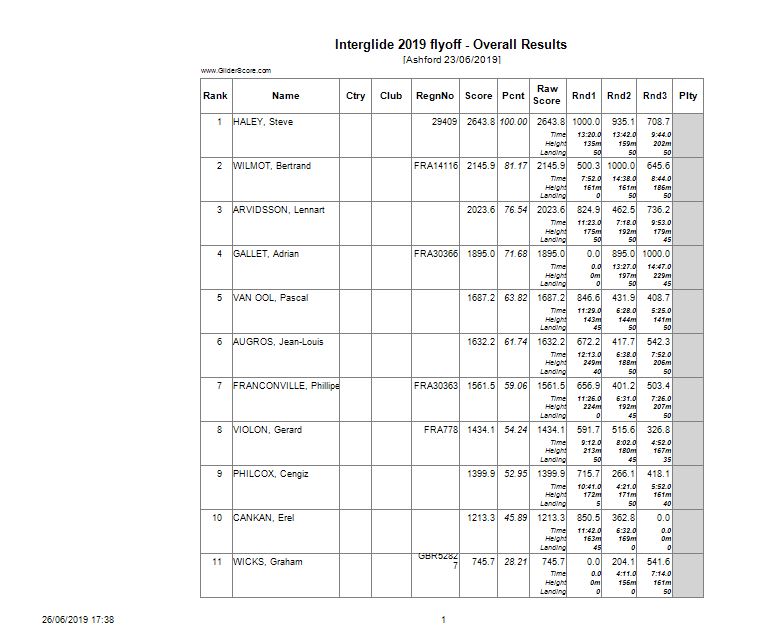 The British Association of Radio Controlled Soarers (BARCS) arranged for the inaugural Interglide in 1982. It was styled “World Interglide” and was organised by the Coventry Club as part of the BARCS 10th anniversary celebrations.
Read More....ENTER ONLINE